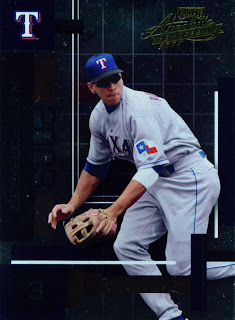 Number five on T.R. Sullivan's list of fifty decisions that have shaped the Rangers is the signing of Alex Rodriguez, shown here on card number 6 of the 2003 Absolute Memorabilia set. All T.R. says about the signing is that it "shook baseball's foundation." I think that wasn't the only foundation it shook.

At the end of the 2000 season Alex Rodriguez was one of the hottest players in Major League baseball. He was also a free agent and determined to cash in. His agent, Scott Boras, was all on board with the cashing in part. Rangers owner Tom Hicks was ripe for the taking.

I remember not really following baseball at the time Rodriguez was on the market. I do remember the crazy things he was supposedly asking for in his next contract. One rumor even had him demanding a private jet to fly him around on road trips. That was crazy. I was glad the Rangers didn't have the money to even consider signing him.

They did sign him though. Ten years and $252 million. Hicks wanted to win and win now. Boras and Rodriguez wanted the cash. Hicks was out of his league and got nailed. Three years later it was over, in February of 2004 the Rangers traded Rodriguez to the Yankees. The Rangers would continue to pay him until the team was sold in bankruptcy proceedings in 2010.

Alex turned in some truly awesome performances while with the Rangers. He was an All-Star and won Silver Slugger awards every year. In 2002 and 2003 he won Gold Gloves. In 2003 he was named the American League MVP. In three seasons he hit 156 home runs and stole 44 bases while getting caught just 10 times. His batting average during that time was .305 and his on-base percentage was .395. He led the league in home runs every year. In 2001 and 2003 he led the league in runs scored and in 2002 he led the league in RBI. He played in more games than any other American League player in 2001 and 2002.

Additionally, Alex grew to like playing in Texas less and less the longer he stayed. He didn't like the organization, fans, or his teammates. In fact, in a 2008 New York Daily News story he talked about how much he hated his time with the Rangers. He said that looking back he should have signed with the Mets. To sum up his feelings about Texas and avoiding a similar signing decision he said, "Oh, my God, where am I? Oh, $400 million to play in some place I hate? Great, I'll blow my --- head off."

Not real complimentary. Of course when he was traded he said that he never would have signed with the team if he had known it would just be him and a bunch of kids. Not exactly sure how Rafael Palmeiro, Ivan Rodriguez, Juan Gonzalez, Kenny Rogers, and Rusty Greer fit into that description.

Of course A-Rod isn't the only one who came to regret the contract. In a 2010 ESPN article former Rangers owner Tom Hicks said he did as well. Hicks summed up his view of the signing, "I've done some dumb things. That was one of the dumb things."

So, the signing was huge. It impacted baseball. It was regretted by both sides. How did it impact the Rangers? I would say it shook their foundations as well.

Tom Hicks dumped an enormous amount of money into Alex Rodriguez. What he had left he threw at Chan Ho Park. The result was that he had no funds left over to try and retain Ivan Rodriguez. Pudge did enjoy playing in Texas and was loved by the fans. Losing him was a serious public relations blow. That was just the first drop though. As mentioned above, the Rangers continued to pay Alex through 2010, in fact he was one of the biggest unsecured creditors that the team had in the bankruptcy sale the signing helped cause. Paying Rodriguez to play for New York meant less money to sign, retain, and develop young talent. Not until Jon Daniels stepped in would the team start to recover.

In summary, the signing was a huge mistake. Both in dollars and years it should have never happened. While a lot of factors contributed to the Rangers dismal decade of the 2000's the signing certainly helped blow one of the bigger holes in the ship.
Posted by Spiff at 12:09 PM