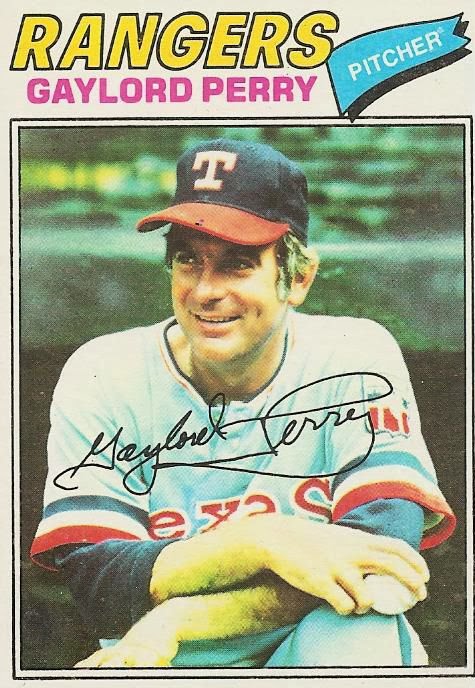 At age 38 Gaylord Perry, shown here on card 152 of the 1977 Topps set, was the old man on the Rangers pitching staff. Already an accomplished pitcher, he served as both a model and something of a coach for the young hurlers.

Perry was also the workhorse of the staff. He made 34 starts (tied with Doyle Alexander for the most on the staff) and completed 13 of those games (second only to Bert Blyleven). He ended the season with a 15-12 record, a 3.37 ERA, and a 1.239 WHIP. Gaylord struck out 177 opposing batters while walking just 56.

While Perry had a good season in 1977 there was apparently some concern that he might not be able to keep performing to the level the Rangers needed. He would be 39 in 1978 and nobody had a crystal ball to see his career extending until he was 44 years old.

In one of the more mis-guided trades in Texas history, the Rangers sent Gaylord Perry to the San Diego Padres on January 25, 1978. They got pitcher Dave Tomlin and some cash from the Padres. On March 28, 1978 the Rangers sold Tomlin's contract to the Cincinnati Reds. All Texas had to show for the loss of Gaylord Perry was some cash in the bank.
Posted by Spiff at 12:25 PM