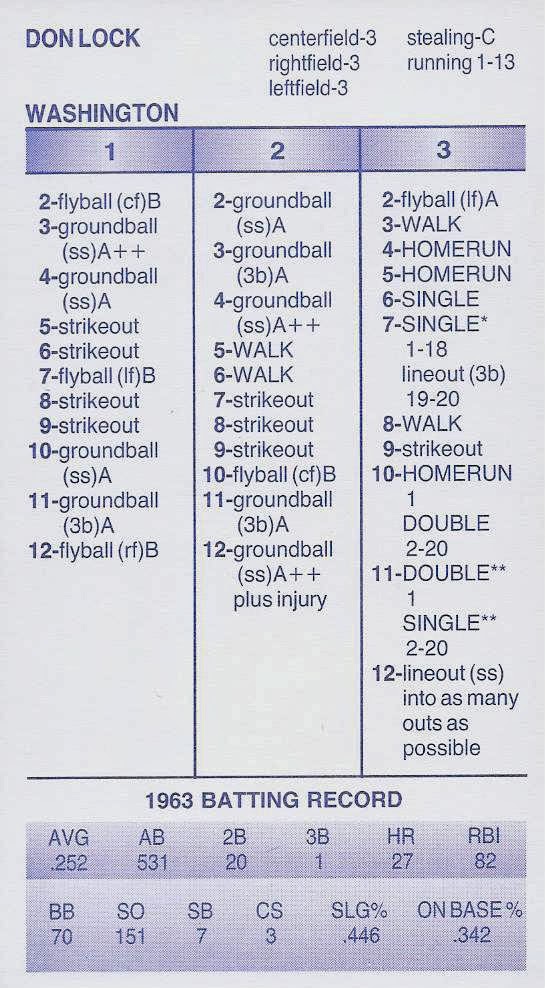 Closing in on the end of T.R. Sullivan's list of the Top 50 Seasons in Rangers History. Today we are at number 48, Don Lock's 1963 season. As you can see from his 1963 Strat-O-Matic card, Lock played for the Washington Senators that year.

Lock was the franchise's first real star but his overall stats were more in the vein of Pete Incaviglia than a super-star. He never played in an All-Star game and received MVP consideration just one season, in 1964. He was the for-runner to Frank Howard though and for a few years was about all the power the Senators had.

In 1963 Don made 611 trips to the plate. He posted a .252 batting average and a .338 on-base percentage. Neither of those are particularly compelling numbers and neither was even best on the team. His 20 doubles were tied for most on the team. His 27 home runs, 82 RBI, and 70 walks were all team bests.

What gets Don Lock onto the list is not his numbers viewed in abstract. You have to take a look at those numbers while remembering that the Senators lost 106 games in 1963 and were outscored by their opponents 812-578. In light of that information it becomes surprising that Lock saw anything to hit once it became known he could.
Posted by Spiff at 11:53 AM