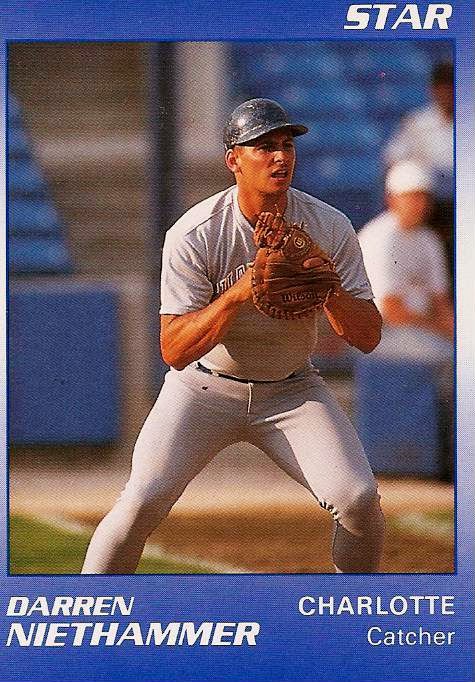 To be real honest, I'm not sure what was going on with Darren Niethammer in 1990. The Rangers drafted Neithammer, shown here on card 16 of the Star Charlotte Rangers team set, in the 16th round of the 1987 draft. He played for The Rookie League Gulf Coast Rangers in 1987 and A ball Charlotte in 1988. He missed the entire 1989 season. I am surmising the missed season was due to an injury but so far I have been unable to confirm that. If anyone has any more information on Darren's missed season I would love to hear it.

Being a catcher in the Rangers' system in 1990 was a tough road if your name wasn't Ivan Rodriguez. Pudge was getting the playing time and was passing everyone up on the depth chart. The road was even tougher if you missed a season and had to return to Charlotte for a second stint on your return.

Niethammer was third on the team in the number of games he appeared behind the plate. Rodriguez was first of course and Michael Crespo was second with 22 games caught. Darren had just 14 games in as catcher. He made no errors in those 14 games but did allow two passed balls.

Darren made 245 trips to the plate in 1990 for Charlotte. He posted a .276 batting average and a .361 on-base percentage. Part of that on-base percentage was due to the fact that he walked 28 times while striking out just 24 times. While his five doubles and no other extra base hits showed a lack of power, it paid to have a player with plate discipline.

Apparently Texas realized Niethammer was not going to make it as a catcher. They must have liked him though and began using him at first base. He played in 52 games there, second only to Doug Cronk's 101. The move made sense, Cronk was stumbling badly and Niethammer might be able to take advantage of the situation. He committed four errors in 426 chances for a .991 fielding percentage.

Interestingly, Niethammer also pitched in two games for Charlotte in 1990, one as a starter and one as the final reliever in the game. The relief appearance is understandable - the team was either out of pitchers or was getting blown out and Darren came in to save the bullpen. I can't quite figure the start though, perhaps a double-header or an unexpected injury or call-up? In either case the pitching experience did not go well for Niethammer. In 3.1 innings he got shelled to the tune of a 16.20 ERA and a 2.400 WHIP. He might be able to move to first but he wasn't going to make the mound his permanent home.
Posted by Spiff at 10:31 PM