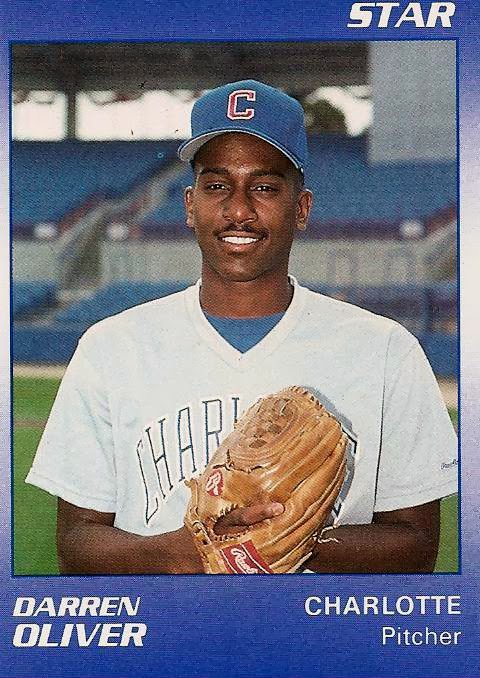 Darren Oliver's appearance on card 17 of the 1990 Star Charlotte Rangers team set is something of a mystery. Texas drafted Oliver in the third round of the 1988 draft and he played that season with the Gulf Coast Rangers of the Rookie League. In 1989 he played for the Single A Gastonia Rangers. In 1990 he would split his time between Gastonia and the Gulf Coast. He didn't even arrived in Charlottle until 1991, the year after this card was issued. Not sure how Star was able to get a picture of Oliver in a uniform he wouldn't wear for another year. Perhaps it's a publicity photo for a promotion that was delayed.

As noted above, Darren split his 1990 season between Rookie ball and Single A. His Rookie League stay was short, just three starts and six scoreless innings. He allowed one hit and one walk while striking out seven.

Oliver's time with Gastonia was another story altogether. While it was also short, one start and two innings pitched, it was a bit rougher. This time the opposing batters managed to score three runs off Ollie. It wouldn't matter though, he still got the promotion to A+ Ball in 1990.

Only three games for a third year prospect who got promoted for the next season? I can't remember hearing about it but I am guessing Darren either got injured of was rehabbing from one. If I had to speculate I would say the latter. The short starts don't make sense before an injury. Good thing Oliver was left-handed, an injury that early to a right hander might have been the end of the road to the Majors.
Posted by Spiff at 7:42 PM