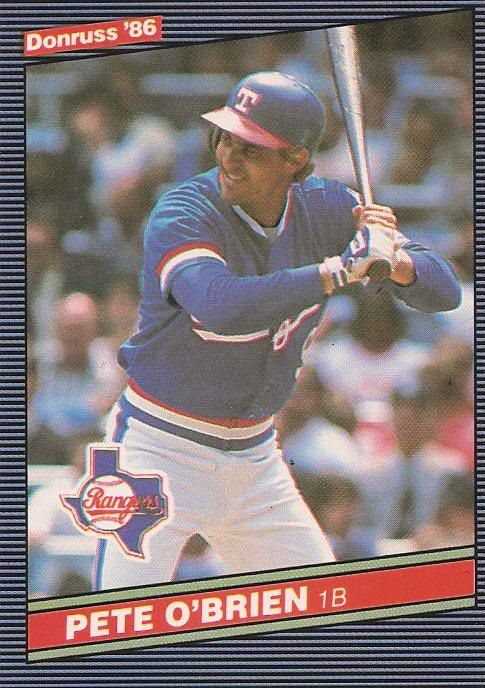 Ok, I'm not going to waste a lot of time on Ian Kinsler's recent comments. Obviously the guy's got some issues and I hope he can get them worked through. I will only say I am not near as surprised and disappointed as I was with Josh Hamilton. Enough on Kinsler's drivel, time for the next installment in T.R. Sullivan's list of the Top 50 Seasons in Rangers History.

Fan favorite Pete O'Brien gets the 47th spot on the list for his 1986 season. O'Brien appears here on card 99 of the 1986 Topps set. Things weren't particularly joyful for Rangers fans going into the 1986 season. The team lost 99 games in 1985 and there didn't seem to be a lot of light at the end of the tunnel.

Pete O'Brien was the starting first baseman for Texas for several years, including 1986. He made 641 plate appearances that season, second only to Oddibe McDowell on the team. He posted a .290 batting average and a team best .385 on-base percentage. He also popped 23 doubles, three triples, and 23 home runs. That led to his scoring 86 runs and bumping in 90 RBI. Unusual for a power guy, he walked more than he struck out - 87 walks to 66 strikeouts.

O'Brien was also a pretty decent defender as well. In 1288.2 innings at first he saw 1350 chances and made just 11 errors. That left him with a .992 fielding percentage, just above the league average.

Pete got some MVP consideration for his performance in 1986. The team and the fans got some excitement. Partially due to O'Brien's season, the team won 87 games. That's not anyone's definition of an all-time great team but it was light years ahead of 1985.
Posted by Spiff at 11:52 AM