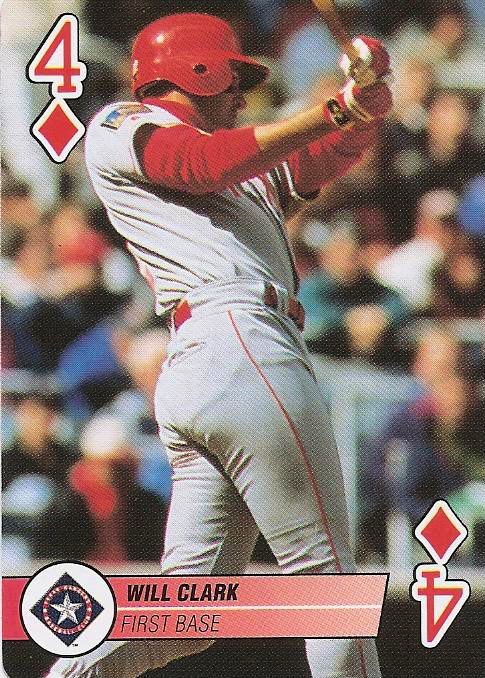 Putting baseball players on playing cards isn't anything new. It probably wasn't new when Will Clark appeared on this four of Diamonds in the 1995 Baseball Aces deck. Cards like this always cause a flashback to my childhood. We played cards quite a bit as a family. Not poker but bluff, hearts, and other such games. I remember my Dad telling me and my brothers that you don't always have a say in the hand you're dealt, just how you play it.

With the injuries mounting, it is looking more and more like the Rangers don't have a say in the hand they're being dealt for the upcoming season. Derek Holland's knee injury and Joseph Ortiz's broken foot in the off-season certainly were not harbingers of good fortune.

In the last couple of days Texas has lost Geovany Soto to knee surgery and Jurickson Profar to a torn muscle in his shoulder. Profar won't need surgery but he's going to be out for 10-12 weeks. Soto is also looking at missing 10-12 weeks. Elvis Andrus and Shin-Soo Choo are still dealing with sore arms and are restricted as far as throwing. To top it all off, Yu Darvish is dealing with stiffness in his neck and may miss his Opening Day start.

These are not the cards a club wants to be dealt to start off a winning season. It's not like the front office could have done much though, they made the best roster they could and now it seems to be falling apart. I guess that's why it's a gamble every season as to how things turn out. Right now it's all hands on deck with every option on the table to cover the losses. Hopefully someone will step up and help the team play the hand well.
Posted by Spiff at 4:56 PM

Cool Will. I'm afraid to even talk about the Rangers for fear that I may end up injured.