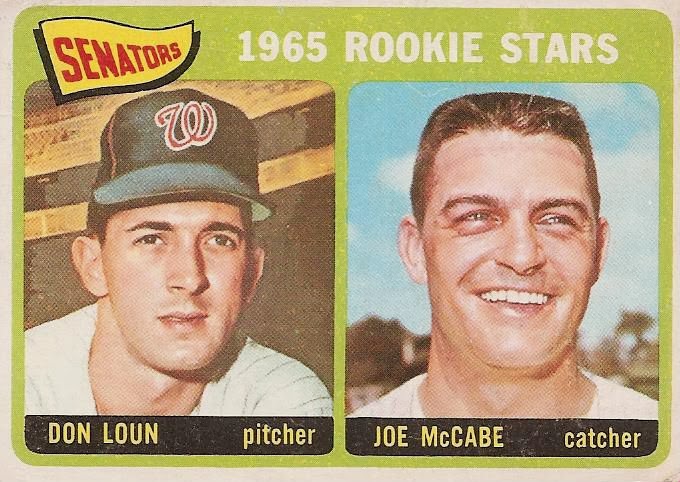 Got a two-for-one Senators Saturday today with card number 181 of the 1965 Topps set. Kind of interesting that Topps put a pitcher and catcher on its 1965 Rookie Stars card for the Senators. While the idea of a battery is a good one, Topps missed the boat with the "Stars" designation.

Don Loun was a September call-up with Washington in 1964. He started two games, completed one, and ended up with a 1-1 record. In 13 innings he ended up with a 2.08 ERA and a 1.231 WHIP. That was probably the reason Topps put him on this card. At 24 years of age it was foreseeable that Loun would make his way back to the Bigs. He never did. Don had a bad year at Triple A in 1965. That set him on a course of bouncing back and forth between Triple A and Double A. He was never able to get his numbers low enough to get another crack with Washington. Loun left the Washington system after the 1968 season. He spent one more year with an independent Double A club before hanging up the spikes after the 1969 season.

Washington obtained Joe McCabe from the Twins in exchange for Ken Retzer in October of 1964. Joe started the 1964 season with Minnesota but appeared in only 14 games before being sent down to Double A. Apparently the Twins didn't care for his .158 batting average and .150 on-base percentage. I'm not sure I've ever seen an on-base percentage lower than a batting average. McCabe would follow the same pattern with the Senators in 1965. He started the season with the team and appeared in 14 games. That gave him 32 plate appearances, 11 more than the previous season. Unfortunately, Joe was unable to capitalize on his second chance. Washington took a look at his .185 batting average and .281 on-base percentage and shipped him down to Triple A for the rest of the year. Not willing to risk a third cycle, McCabe retired as a player following the 1965 season.
Posted by Spiff at 12:00 PM