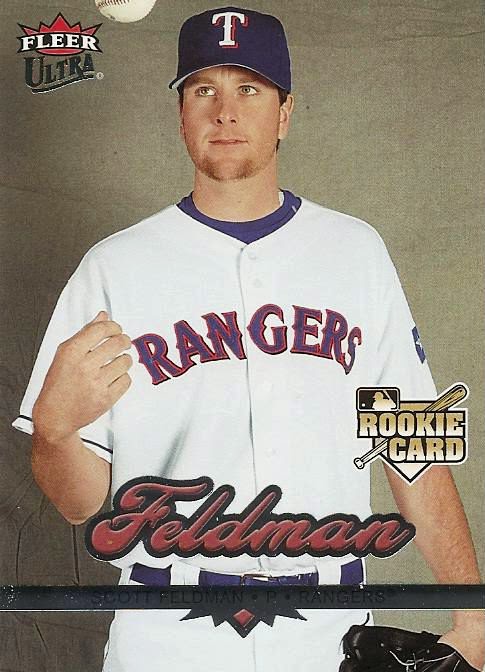 Well, today we come to the end of T.R. Sullivan's list of the Top 50 Seasons in Rangers History. Scott Feldman, shown here on card 198 of the 2006 Fleer Ultra set, gets the final spot. Feldman comes in at number 50 for his 2009 season.

Scott Feldman started the 2009 season in the bullpen. After just three appearances there, he moved into the starting rotation. He would make a career high 31 starts and pitch a career high 189.2 innings. What gets Feldman on the list is the wins. Scott won 17 while losing 8. He also set a franchise record for road wins since he was actually a better pitcher on the road than at home.

2009 was the edge of the launching pad for the Rangers. They would go to the World Series for the next two seasons. In 2009 they were just a piece or two from the trip and finished second in the the American league West. Scott Feldman was one of the main benefactors of the situation and won far more games than his 4.08 ERA and 1.281 would have suggested. However, following his win chase was a much needed shot of encouragement for Rangers fans.

So we are at the end of T.R. Sullivan's last list. Hope you enjoyed it a little and maybe even learned a thing or two about the Rangers and some of their past players.
Posted by Spiff at 12:03 PM