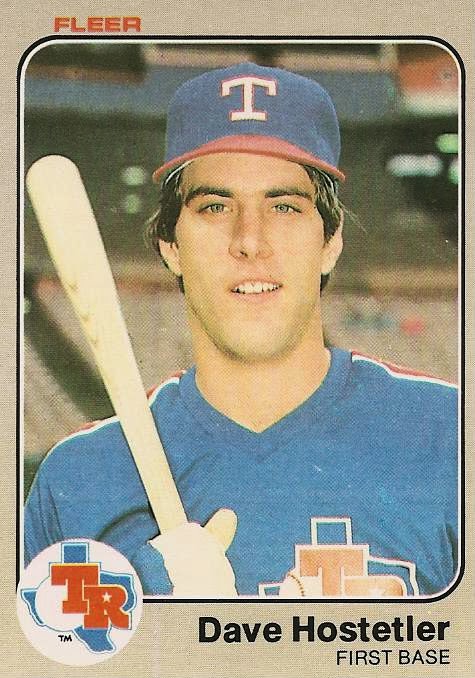 Well, the Rangers made six roster cuts this morning as they start to thin the numbers leading up to the season. Among those leaving the Big League camp are Wilmer Font and Rougned Odor. Ron Washington also says the closer race is still wide open. Tanner Scheppers is still in the running for a starting job and Neftali Feliz and Joaquin Soria are not yet fully back from their Tommy John surgeries. Going to be interesting.

Going to take the opportunity to move along in T.R. Sullivan's list of the Top 50 Seasons in Rangers History. Almost to the end of the list. Have Dave Hostetler, shown here on card number 569 of the 1983 Fleer set, coming in at number 49 for his 1982 season.

By 1982 the Rangers were clearly in decline and there seemed to be little being done about it. In came rookie Dave Hostetler. Dave had a cup of coffee with the Expos in 1981 but 1982 was his rookie season and he arrived with gusto. In 113 games Hoss got 466 plate appearances. He batted just .232 but his 42 walks helped bring his on-base percentage up to an even .300. What was impressive though was his team leading .433 slugging percentage. That came from his 12 doubles, three triples, and team best 22 home runs. He scored 53 runs while picking up 67 RBI.

Hostetler's power would dry up over the next couple of years but for one season he brought some excitement back to Arlington. Rangers fans weren't the only ones to take notice as Dave received some consideration for Rookie of the Year.
Posted by Spiff at 12:01 PM

Rougned Odor. That's a name you don't see every day.