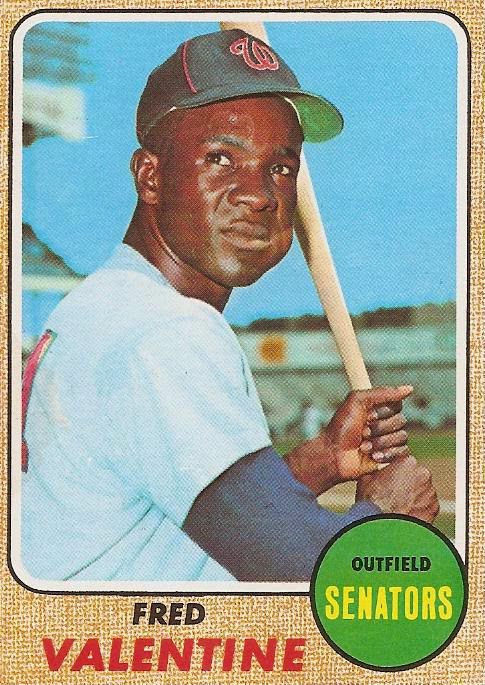 First off let me say I know I should have saved card 248 of the 1968 Topps set for next Saturday. A card featuring Fred Valentine on Valentine's Day would have been suitable. I didn't want to get out of order on my walk through my Senators team sets though and probably wouldn't have remembered to come back to it if I skipped it. That's the problem of constantly adding to sets and posting the cards.

Anyway, Fred Valentine was coming off a downer season in 1967 and trying to compete for a spot in the crowded Washington outfield in 1968. Unfortunately for Fred, Del Unser, Frank Howard, and Ed Stroud pretty much nailed down the starting outfield jobs in 1968. That left Valentine competing with Cap Peterson, Brant Alyea, and Sam Bowens for the backup outfielder slot.

Valentine was unable to do anything to stand out from the crowd in the 37 games he appeared in for the Senators in 1968. His defense was passable on the surface, he committed no errors in the 202.2 innings he played in right field and the three innings he played in center. He still had significantly less range than the average American League outfielder though and that was a concern.

Fred made 110 plate appearances for Washington in 1968 and posted a .238 batting average. That was up just four points from the season before and his .291 on-base percentage represented a 39 point drop. His power also seemed to be on the blink as he hit just two doubles and three home runs.

The Senators outfield was crowded and they needed pitching help. Fred Valentine was the extra piece. On June 15, 1968 the Senators sent him to Baltimore in exchange for pitcher Bruce Howard. Howard would turn in an awful remainder of the season for Washington. Valentine would see his bat evaporate even further with the Orioles. Neither player would appear again in the Major Leagues after 1968.

Fred did manage to play one season in 1970 in the Japanese Majors.
Posted by Spiff at 11:18 AM