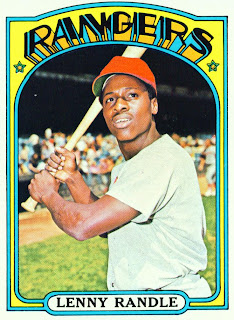 1972 was Randle's second Major League season. He had played for the Senators in 1971 and made the move to Texas with the team. In '72 Lenny would platoon with Vic Harris at second base.

Len had a rough year as he batted just .193 in 267 plate appearances. He struck out 51 times while walking just 13. That probably contributed to his .235 on base percentage. Luckily for him, Harris' numbers were worse.

Randle also struggled in the field. His .952 fielding percentage at second was well below the league average .977. In 333 chances at second he committed 13 errors.

Those numbers made for a dismal first season in Arlington. Randle would stick around though and bounce back.
Posted by Spiff at 12:01 PM