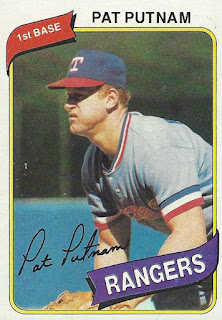 Pat Putnam appears here on card 22 of the 1980 Topps set. He would appear as the Rangers regular first baseman in 1980. Coming off a pretty good 1979 season, Putnam had reason to hope he would be able to nail down the starting first base gig. The Rangers were hoping he would as well.

Pat struggled a little against left-handed pitching and that cut into his playing time. He still appeared in 147 games for the Rangers in 1980, starting 102 of those games. Primarily appearing at first base, Putnam put in 956 innings over 137 games there. He committed nine errors to end the season with a .992 fielding percentage. That put him at exactly the league average for first basemen. Pat also had a one inning cameo at third base and one game he appeared in as the Rangers designated hitter.

Putnam made 454 trips to the plate and put up a .263 batting average, 14 points lower than the previous season. His .319 on-base percentage was the same as his rookie year. His 36 walks were 14 more than in 1979 and helped keep his on-base percentage the same. He also struck out 49 times, only one fewer than the previous season. Pat scored 42 runs while knocking in 55 RBI. He did see his power dip a bit as he hit 16 doubles (down by three), two triples (same), and 13 home runs (down by five).

With the exception of an average dip and a slight lessening of power, Pat Putnam appeared to have largely avoided the dreaded sophomore slump. His difficulties against left-handed hurlers were a matter of concern but he was still young and could end up adjusting there. The adjustment needed to happen in 1981 though, before it became a major issue.