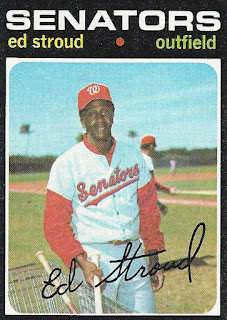 Ed Stroud appears on card 217 of the 1971 Topps set looking as if he is shopping for a bat. Looks like this photo was probably taken during Spring Training. This would be Stroud's last card in a Senators uniform.

Coming off a rather mixed 1970 season, Ed Stroud appeared to be beginning a defensive decline. The Senators decided to move him. On March 29, 1971 the club traded him back to the White Sox, where Ed began his Major League career. In return Washington received Tom McCraw.

As for Ed, he would split the 1971 season between Chicago and Triple A Tucson. He batted under the Mendoza Line with the White Sox and over .300 with Tucson. At the end of the season he called it a career and hung up the spikes as a player.
Posted by Spiff at 10:00 AM