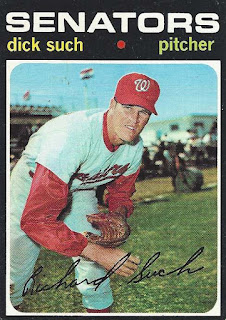 By the time Dick Such appeared on 1971 Topps card 283, his Major League playing career was over. The Senators drafted Such in the eighth round of the 1966 secondary draft. After some ups and downs in the minors, Dick made the 1970 Senators roster out of Spring Training. He made his Major League debut on April 6, 1970.

Serving both as a reliever and starter for the Senators, Such appeared in 21 games for Washington in 1970. Five of those appearances were starts. He pitched 50 innings and stumbled to a 7.56 ERA and 1.860 WHIP. The fact that his 45 walks outnumbered his 41 strikeouts didn't help. Dick's 1-5 record was probably an accurate reflection of his struggles. Following his appearance on July 17, 1970 the Senators sent him down to Triple A to finish out the season.

Although 1970 had been rough, even at Triple A, the Senators left Such with the Triple A Denver Bears for 1971. He appeared in 24 games for Denver, 11 of which were starts. Over the 78 innings he pitched he watched his ERA balloon to 6.12 while his WHIP came to an unsightly 1.731. Dick did manage to strike out more batters than he walked, 48 compared to 33, but it was a poor silver lining. He ended the season with a 5-5 record and a ticket to Single A Burlington.

In 1972 Such turned in a decent season with the Burlington Rangers. That earned him a promotion to the Double A Pittsfield Rangers. There the wheels came off again as his ERA was over 7.70. That spelled the end of the line for Dick as a player. The 1973 season would be his last on the mound.

Following his playing career, Dick Such moved into coaching. He made it back to the Majors as a member of the Rangers coaching staff from 1983-1985. After that it was 17 years with the Twins. Two of those teams made it to the World Series. More recently Dick has been passing on his knowledge to young players as a pitching coach in the minor leagues.