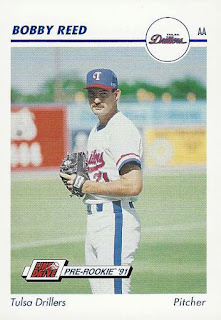 Pitcher Bobby Reed appears on card 591 of the 1991 Line drive set today. Reed was drafted by the White Sox in 1989 but didn't sign. The Rangers drafted him in the third round of the June, 1990 draft and that time he signed.

Texas started Bobby off at Single A and he turned in impressive performances there and at Double A Tulsa in 1990. Not wanting to rush the young talent, the Rangers left Reed at Double A for the 1991 season.

Primarily a starter, 11 of Bobby's 12 appearances for the Drillers were starts. Over the 67 innings he pitched he put up a decent 2.55 ERA (lower than his Double A stint the previous season) and an 1.254 WHIP (also lower than the year before). He struck out 33 opposing batters but still had some control issues, as attested to by his 22 walks. He ended the season at 4-4.

It seems to me that Bobby Reed had an abbreviated season in 1991. I would have expected to see more appearances and maybe even a mid-season promotion to Triple A. Instead he disappears for the entire 1992 season and resurfaces in 1993 at Single A Charlotte. At that point his numbers are not even comparable to those before the hiatus. That speaks to me of an injury, obviously a serious one. Unfortunately I can't find any information on what happened to make 1991 the high point of Bobby Reed's career.
Posted by Spiff at 10:30 AM