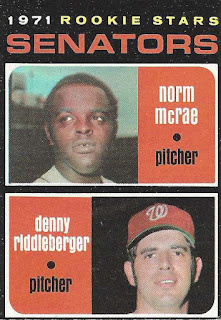 Getting towards the end of my Senators collection. May have to put the Senators Saturdays on hold soon if I can't find more to post or add a few more to the collection. That's not a problem today though. Norm McRae and Denny Riddelberger are up today on card 93 of the 1971 Topps set. Let's take a look at how these "rookie stars" worked out for Washington.

Norm McRae came to Washington from the Tigers on October 9. 1970 as part of the ill-considered Denny McClain trade. McRae already had a little Major League experience, having had short stints with Detroit in 1969 and 1970. 1970 was the more impressive of the two: a 2.87 ERA over 31.1 innings of relief. Of course, his 1.628 WHIP and the fact that he walked 25 while striking out only 16 were areas of concern.

The Senators assigned Norm to Triple A Denver for the 1971 season and experimented with making him a starter. McCrae appeared in 34 games for the Bears and started 26 of them. All told he tossed 171 innings. He did manage to reverse the strikeout to walk issue - tallying 121 whiffs and issuing 82 free passes. Nothing about his 4.89 ERA, 1.667 WHIP or 6-13 record enticed the Senators to give him a try in Washington. In 1972 he would again be assigned to Denver, this time as a part of the Rangers farm system. That assignment wouldn't last long though. On May 30, 1972 the Rangers sent Norm back to Detroit in exchange for infielder Dalton Jones.

Denny Riddleberger came to the Senators in a August 31, 1970 trade that sent George Brunet and some cash to the Pittsburgh Pirates. Riddleberger had spent most of 1970 at Triple A but the Senators immediately brought him to Washington and he finished out the season with the club. In a limited sample (9.1 innings), Denny posted a tiny 0.96 ERA and 0.964 WHIP. That was enough to earn him a second look from the Senators. He would spend the entire 1971 season with Washington.

Riddleberger performed decently with Washington in 1971, appeared in 57 games in relief. Over 69.2 innings he put up a 3.23 ERA and a 1.421 WHIP. He walked 22 opposing batters but also struck out 34. Denny ended the season with a 3-1 record and one save. Riddleberger was showing some promise but the Senators wouldn't be around to develop it. The franchise was moving to Texas and Denny was moving as well. On December 2, 1971 the Rangers traded Riddleberger, Gary Jones, Terry Ley, and Del Unser to the Cleveland Indians for Ken Suarez, Roy Foster, Rich Hand, and Mike Paul.
Posted by Spiff at 9:30 AM