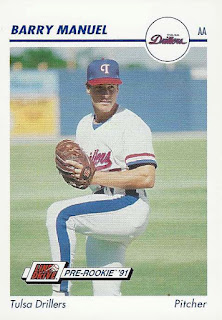 1991 would be Barry Manuel's second stint with the Double A Tulsa Drillers. Manuel, shown here on card 586 of the 1991 Line Drive set, hadn't had a real positive experience in his previous appearance as a starter at Double A in 1989. The result was a return to Single A and the 1990 season being spent in a conversion from starter to reliever. Barry handled that task well enough to earn a return ticket to Tulsa for 1991.

Strictly a reliever, Manuel came out of the bullpen 56 times for the Drillers in 1991. Over 68.1 innings he put up a 3.29 ERA and a 1.420 WHIP. Both were jumps up from the previous season with Charlotte. Barry also walked 34 but did manage to strike out 45 opposing batsmen. He earned 25 saves for his trouble but ended the season with a 2-7 record.

Apparently the Rangers were impressed with Manuel's progress as a reliever. They called him up when the rosters expanded in September and he made his Major League debut on September 6, 1991. Through the end of the season he appeared in 8 games for Texas and pitched a total of 16 innings. Using the opportunity, Barry posted an attention grabbing 1.12 ERA and 0.812 WHIP. He did walk six batters but used his five strikeouts to help get out of jams as well.

The Rangers liked what they saw from Barry Manuel in his brief Major League stint. While he wasn't ready for the big time yet, he had lots of promise. He would move to Triple A Oklahoma City to start off the 1992 campaign.
Posted by Spiff at 9:30 AM