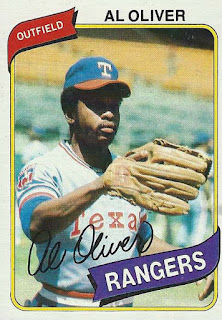 Al Oliver, shown here on card 260 of the 1980 Topps set, showed a little defensive slippage during the 1979 season and was moved from center to left field in 1980.

In his third season with Texas, Oliver played in 141 games as the Rangers starting left fielder and committed eight errors there over 1194.1 innings. That gave him a .974 fielding percentage, six points below the league average. Al was above league average during the 146.1 flawless innings over 16 games he played in right field. He also played four games as the Rangers designated hitter and made a one inning cameo appearance at first base. It was the first time Scoop had played first since the 1976 season.

As you might suspect from the defensive numbers, Oliver played in a lot of games for Texas in 1980. 163 games to be exact. That was the most of any player in the American League. In a team-leading 709 plate appearances Al put of a .319 batting average and a .357 on-base percentage. Both were slight drops from the previous season but still placed him firmly in the top ranks of the Rangers roster. He did see his strikeouts climb to 47. His walks also increased but could not keep pace, totaling to 39 for the season. Oliver hammered 43 doubles (a team best), three triples, and 19 home runs (tied for team best). He also scored 96 runs and knocked in a team high 117 RBI.

All in all, Al Oliver had a very good season for the Rangers in 1980 and proved his wrist injury in 1979 was no longer bothering him. The fact that he was second in the league in doubles, fourth in RBI, fourth in hits, and in the top ten in batting average earned Scoop attention outside Texas. He was named to the All-Star team, won a Silver Slugger award, and even got some MVP consideration. MLB.com Rangers reporter T.R. Sullivan would also name Oliver's 1980 campaign as #15 on his list of all-time Rangers Best Seasons.