Through the mail tales. 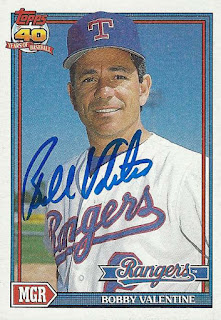 Had a great week of through the mail returns this past week. Nine autographs total from five former Rangers players and former Rangers manager Bobby Valentine. All of the returns filled holes in my ongoing quest to get complete Topps Rangers team sets signed

Bobby V graciously signed and returned this 1991 Topps card along with a 1989 Topps card. Also coming back home were signed cards from Danny Patterson, Bobby Witt, Ken Suarez, Cris Carpenter, and Bucky Dent. Many thanks to all these gentlemen for taking the time and sign and return my cards.

The fastest return came from Ken Suarez, I mailed out a 1972 Topps to him on March 3rd and it returned home on March 9th. Mr. Suarez also took the time to jot a quick thank you to me for writing him.

The longest return was Bucky Dent who took from January 20th to March 4th. I sent Mr. Dent two cards, a 1983 Topps and a 1984 Topps. Interestingly, he kept the 1984 Topps but signed and returned the 1983 Topps. Curious. Still, a return is a return and I'm not complaining.

On the really weird front was a return that was not really a return. Earlier in the year I sent former Ranger Dave Moates a request that came back return to sender. I checked the address I used and decided I wrote the city down wrong. On February 24th I sent a second request to what I believed was the correct address. On March 8th I received the request back marked "Return to sender". What I found strange was that the envelope had been opened, the contents taken out, rearranged, put back in, and the envelope taped shut before being sent back. Apparently Mr. Moates either did not like my letter, wants money to sign but does not want to say so, or is simply not signing these days. At least I got my card back I suppose.
Posted by Spiff at 10:30 AM

Congrats on some nice returns. Weird how that one request came back after it had been opened.