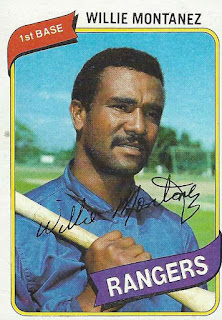 It is fitting that Willie Montanez appears on card 224 of the 1980 Topps card 224 with no identifiable uniform on. His time with Texas was so short he almost didn't need a uniform.

Montanez arrived in Texas on August 12, 1979 as the result of a trade with the New York Mets. The Rangers agreed to send New York two players to be named later. Ed Lynch and Mike Jorgensen ended up being those players but neither went to the Mets until after the end of the season.

In the last part of the 1979 season Willie appeared in 38 games for the Rangers. He posted a nice .319 batting average in 154 trips to the plate. His .357 on-base percentage seems a bit at odds with the fact that he struck out 14 times and only worked eight walks. Montanez had limited power: six doubles, no triples, and eight home runs. He put of a .995 fielding percentage with only one error in 170 innings at first base.

Apparently Willie's performance with the Rangers in the latter part of 1979 made him a desirable commodity. On February 15, 1980 Texas traded Montanez to the San Diego Padres. In return the Rangers got Joe Carroll, Tucker Ashford, and Gaylord Perry. Willie Montanez's cameo as a Texas Ranger was over.
Posted by Spiff at 3:09 PM

Willie was a handsome man.