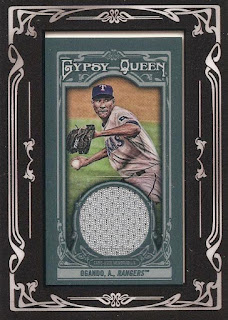 So, former Ranger Alexi Ogando doesn't have anything to do with last night's win over Houston. However, I don't have any game-used or autograph cards of the key players from last night. Alexi was part of one of the best Ranger bullpens ever. There is a connection there as the win last night was in large part due to the bullpen.

Cole Hamels took the hill last night looking for his tenth straight win. Pitching in and out of trouble, Hamels lasted 6.2 innings and allowed just one Astros run - a long ball in his last inning of work. A lot of Cole's success was attributable to nice defensive work behind him.

Meanwhile, the Texas bats were largely ineffective against 'Stros starter Doug Fister. Rougned Odor was an exception to the rule though. In the second inning Rougie parked a ball in the right field stands to score two runs. That would be it for the Rangers.

Hamels left the game after hitting a batter in the foot in the seventh, it was his third hit batsman of the game and a career high for him. None of the hit batters appeared to be intentional. Sam Dyson came in and finished out the seventh with no runs. Dyson started off the eighth before giving way to Jake Diekman with one out. Diekman fanned both batters he faced to send the game into the ninth still 2-1. Shawn Tolleson gave up one hit in the ninth but otherwise shut Houston down to pick up his fifth save of the season as Texas came out on top by a hair.

Great to see the guys secure the series win and string together three wins in a row for the first time this season. Also extremely encouraging to see the bullpen back to clicking after their early struggles and hold the lead in a squeaker. This pen was projected to be one of the best in baseball this year and, if Texas is going to go anywhere, they are going to need to live up to their potential.