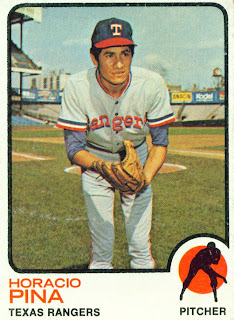 Looks like Monday was the Rangers' day off again. Seems like they have had a lot of Mondays off this season. Well, with no game last night it seemed like a good time to take another look at the 1973 team set.

On November 30, 1972 Horacio was traded to the Oakland A's for former Washington Senator Mike Epstein. Epstein would spend only a short time with the Rangers before being traded to the Angels in May of 1973. Interestingly, Rick Stelmaszek also went to the Angels in that trade. In July of 1974 the Cubs traded Horacio Pina to the Angels for Stelmaszek. Guess it's a small world after all.
Posted by Spiff at 1:36 PM

I always applaud a Stelmaszek reference.

Cinykid - where did you get your '72 jersey? I would like to get a blank on from either the late '70s or early '80s but haven't been able to find one.