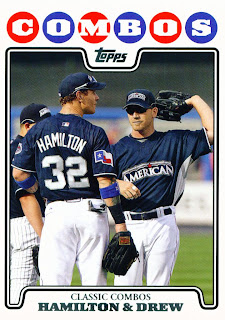 So Josh Hamilton appears today, sort of, on card number UH112 of the 2008 Topps Updates and Highlights set. This card has got to be one of the most flawed in my Rangers collection. Not only is Josh poorly pictured but J.D. Drew manages an awkward pose. Aside from the photographic issues I have yet to figure out what makes Hamilton and Drew a "Classic Combo." They have never played on the same team and really don't have similar life stories as far as I know. Topps doesn't explain their choice on the back of the card either.

Speaking of flaws, the Rangers have had their fair share lately. I actually got to see some of them on display in the 8-2 loss to Oakland in Texas on Sunday. Colby Lewis was not sharp. Neither was the rest of the team. Only Josh Hamilton hit like he meant it. Lewis and Michael Young both botched plays. Lewis got booed and later expressed his frustration with the fans to the media. Not good.

Cliff Lee has been flawed as well lately. Tonight he is getting shelled by the Royals. Yes, the Kansas City Royals. The team that wasn't exactly a powerhouse to begin with and has now traded off most all offensive threats they had to start the season. They have made Cliff throw 80 pitches through four innings and have put four runs on the board. Lee's last two starts didn't go much better and one of them was against the Baltimore Orioles. It's gotten to the point that the radio team was speculating tonight about C.J. Wilson possibly teaching Lee how to win. Not good.

Josh Hamilton's right knee has been acting up. He has been at DH several times in the past few games. Now the word is that he will have "lubricant" injected into the knee tomorrow. Doesn't sound good.

Rich Harden is a lost man. The big off-season signing has had a couple of great starts. Most of the time though he acts like he has no idea where the ball is going when it leaves his hand. It is rumored that Nolan Ryan talked to him to no avail. He's in the bullpen now. Not good.

None of the flaws are insurmountable. Teams hit skids and that's part of the game. The team also has some great things going on as well and I will try to talk about some of those in a future post. For now though I am hoping that the team starts firing on all cylinders before too much longer.
Posted by Spiff at 7:21 PM