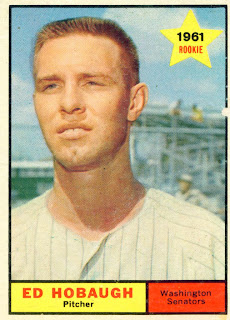 Ed Hobaugh, shown here on card number 129 of the 1961 Topps set, was drafted from the White Sox in the 1960 expansion draft. At the time Ed had no Major League experience but had spent three years in the Sox system and two in Uncle Sam's system (military service in 1957-58).

Coming straight from Triple A, Hobaugh jumped right into the fray as he made the Senators' starting rotation. Well, he sort of made it. In 26 appearances for Washington Ed started 18 games. He would post a 7-9 record and a 4.42 ERA. In the 126.1 innings he pitched he would strike out 67 batters while walking the same number.

Ed's 1961 numbers were unimpressive. Of course, so was the team's record. It wasn't like there was a lot of competition from within the organization either. With the castoffs from other franchises composing the team, a rookie like Hobaugh might be able to learn on the move and snag a full-time job as a part of the pitching staff. He would have to move quick though.
Posted by Spiff at 12:01 PM