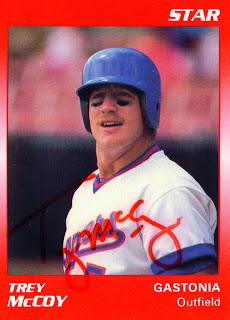 Since this is a pre-recorded post you will have to settle for a random Ranger auto. Today we see Trey McCoy's autograph on a 1989 Star card showing him with the Gastonia Rangers. The card is signed with a red sharpie so it's a little hard to see but it does go with the card border. I got this autograph as part of a lot off Ebay but I am pretty sure it's the real McCoy, there seems to be little motivation for someone to forge Trey's signature.

Gastonia was the Rangers Single A farm team and Trey was in his second professional season when this card came out. He had originally been picked by Texas in the ninth round of the 1988 draft.

Trey would spend all or parts of eight seasons in the Rangers' system. Another year plus in the minors for the Mets and he was done, a career minor leaguer. To be honest, I'm not sure why Trey never at least got a September cup of coffee with the Rangers. Perhaps there were just too many other outfielders ahead of him in line.
Posted by Spiff at 12:01 PM