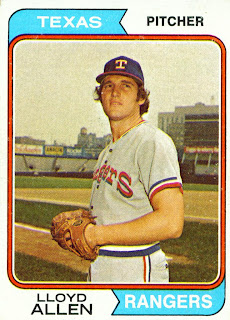 1974 was the first winning season for the Rangers since the team moved to Texas and only the second since the team was founded in 1961. The team would post a season record of 84-76 and finish second in the A.L. West behind the Oakland A's.

Lloyd Allen, seen here on card number 539 of the 1974 Topps set, would appear in 14 games in relief for Texas in 1974. In the 22 innings he pitched he would post a horrifying 6.55 ERA. He did manage to strike out 18 batters but walked the same number and hit an additional batter for good measure. Amazingly he was only responsible for one loss.

By June the team had seen enough and placed Lloyd on waivers. On July first he was claimed by the Chicago White Sox. That would be the end of Allen's Texas career. Just two partial seasons in Texas, 1973 and 1974, and he was gone.

As a footnote on this start to the 1974 season review I would recommend that you check out the 1974 Topps Set blog if you get the chance. Steve is just getting going and I am considering adding him to my link list.
Posted by Spiff at 4:18 PM