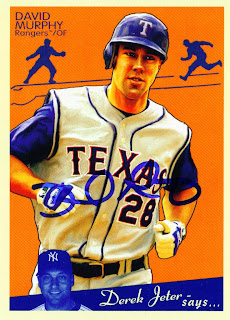 Ok, so a couple of days ago I posted about some of the things on the Rangers that have been bothering and concerning me lately. Of course there is the other side of the coin. Some great things are going on as well.

David Murphy signed and returned this card to me through the mail last season. This season he has been a joy to watch play. The guy that many saw as a fourth or maybe fifth outfielder has really stepped up. His bat has been on fire during Nelson Cruz's trips to the Disabled List. That and his nice defense are putting Ron Washington in a rough spot of having too many great outfielders. Murph has been a go to guy for the team this year.

C.J. Wilson. Coming off a rough year last year with an injury that bounced him out of the closer role. Dominant as a starter this year. 14-5 with a 2.88 ERA. Ace stuff there. Can't say too much good stuff about him.

Josh Hamilton has bounced back from an off season last year and has so far avoided the injury bug. His knee is a concern but his bat is not. Leads the league in batting average at .361 and hits at 181. He is also in the top five in home runs, slugging percentage, and on base percentage. Throw in his speed (8 stolen bases v. one caught stealing) and defense and the talk of league MVP becomes understandable.

Tommy Hunter. Didn't even start the season with the team. Now he's in the starting rotation with a 12-2 record. That equates to a league-leading .857 winning percentage. His 3.64 ERA isn't lights out but it keeps the team in the game. That helps explain the win-lose record.

Nelson Cruz. Despite two trips to the DL and only 80 games Nellie has proved that he has a big bat this year. His .313 batting average includes 16 home runs and 22 doubles. He's also stolen 15 bases and only been caught four times.

Neftali Feliz. Young rookie who grabbed the closer job after Frank Francisco's early season struggles. Neffy has finished a league-leading 49 games and is currently sitting on 34 saves. Nice to have a closer who closes. That and the 59 strikeouts in 58 innings is fun to watch.

Of course this list isn't complete. One can't overlook Elvis Andrus, Darren O'Day, Vladimir Guerrero, Alexi Ogando, and quite a few more. It's been a fun ride in 2010. Here's to hoping the guys can keep it going.
Posted by Spiff at 12:23 PM

29 more games until the playoff drought is OVER!!!! Can't wait.