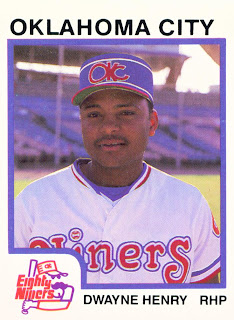 So the Rangers didn't win last night and it's not looking good tonight either. Josh Hamilton is still out and the reports are not encouraging. To top it all off Oklahoma City officially announced today that they are now the Houston Astros' affiliate. Going to miss OKC being in the Rangers' system.

With that thought in mind let's take another look at the 1987 Eighty-Niners team. Today we see a very young looking Dwayne Henry on card number 150 in the 1987 ProCards set. I have seen Henry on several cards and always think he looks like a high school kid. Must just have that young look.

By 1987 Dwayne had seven seasons in the Ranger's system. In fact, he had already seen Major League action in 1984, '85, and '86. He would again in 1987 but again wouldn't stick with the parent club. Probably his horrendous 9.00 ERA in ten innings pitched had something to do with the Rangers sending him back to Oklahoma City.

Nothing in Dwayne Henry's Triple A numbers was anything to get excited about. About the best that could be said was that they weren't as bad as his stats at the Big League level. Seven seasons in for a second round draft pick is getting late. Dwayne Henry needed to get it figured out to get out of Triple A on a permanent basis.
Posted by Spiff at 10:37 PM

Where will Texas' Triple A team end up?

Round Rock, Texas. It's down by Austin and owned in part by Nolan Ryan. The Rangers are actually the ones who ended the relationship, not OKC.