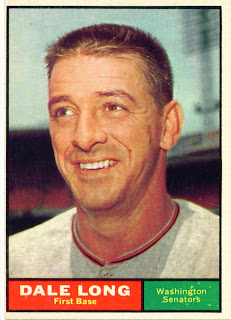 Dale Long appears today on an off-center copy of card number 117 in the 1961 Topps set. Like five of the previous six cards we have seen from this set Dale is hatless. He is also not in a Senators' uniform. Since he was drafted from the Yankees I was a little confused as to whose uniform he is in. Black and orange are not Yankee colors. A little checking revealed that the Yankees purchased Dale from the San Francisco Giants in August of 1960 only to lose him to Washington in the expansion draft in December. That explains the orange and black - Giants.

Dale ended up as the Senators' primary first baseman in 1961. He would appear in 123 games and play 817 innings on defense, all at first base.

At the plate Long would post a .249 batting average and a .317 on base percentage in 423 plate appearances. He struck out more times than he walked (41 to 39). He did knock 17 home runs though, tied for second behind Gene Green's 18. His 49 RBI put him in the upper part of the middle of the pack for Washington's starting nine.

On defense Dale saw 904 chances and committed 15 errors for a .983 fielding percentage. That put him seven points below the league average. That didn't make his fielding look good next to backup first-sacker R.C. Stevens.