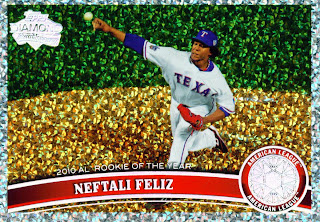 Been a busy past couple of days. Lots going on and lots on my mind. The result has been that posting has been a bit sporadic. Hopefully I will be able to get back on track and into the swing of things again.

Listened to the game in Kansas City last night. Quite the game it was. Interesting too that I had to listen to part of it on the local Royals station and so go a bit of the other side of the story.

Alexi Ogando threw 116 pitches as he went through seven innings. When he left the game was tied at two. One of the Rangers runs had come when Craig Gentry walked, stole two bases, and came home on a sacrifice fly. Weird. Texas had been stealing like mad on Matt Treanor all night but had also been stranding runners at an amazing pace.

Texas scratched out a run in the top of the ninth against KC's closer to take a 3-2 lead. In came Neftali Feliz, pictured here on card number 26 of the 2011 Topps Diamond Anniversary set. Piece of cake. Feliz will mow them down and that'll be it. Not so. Young KC call-up Eric Hosmer parked Neftali's first pitch over the fence. First blown save on the year for Feliz. Tied again. Bummer.

Feliz then walked the next batter. Uh-oh. In came a speedy pinch-runner. Bad news, Feliz has no pickoff move. A toss over to first. Runner back in easy. Come on, concentrate on the batter - you'll never get the runner. Got him! Picked him off! First time Feliz has ever picked a runner of first. Good deal, now to get the batter. Walked him. What!?! Another pinch runner. Another toss over to first. Back in safe. Another throw over. He got another one! Back to back pickoffs by a pitcher who had never picked a runner off first before then. Very cool.

Even better, Texas wins in 13 innings. Royals manager Ned Yost said after the game that he thought Feliz was balking. Four throws, no balks called and he was balking? Come on Ned, really? Maybe lightning just struck twice.
Posted by Spiff at 8:48 PM

The Rangers inability to put runs on the board is KILLING me. I hope they come around when Cruz and Hamilton get back.