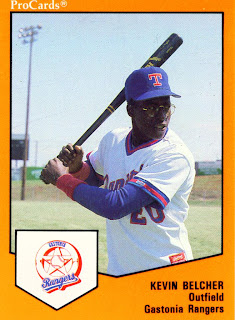 Wow! Just realized that I haven't posted a Minor League Monday card since mid-March. Must have had a lot of current Ranger news to write about. Coming in to break the Minor League dry spell is Kevin Belcher on card number 1004 of the 1989 ProCards set.

1989 was Kevin's third pro season and his second with Single A Gastonia. The sixth round pick from the 1987 draft would play in 93 games and make 385 plate appearances.

Kevin's defense wasn't much to write home about as he made four errors in 181 chances for a final fielding percentage of .978. I wasn't able to find out how many innings he played on defense.

His offense showed more promise but there were some downsides. He posted a .296 batting average and a .357 on-base percentage. He cranked 21 doubles but struck out 62 times. He did walk 31 times though.

Although not the numbers of a slugger, Belcher's offense had improved in almost all of the major categories. His defense, while also not sterling, had improved as well. As a result he would be promoted to Double A Tulsa for the 1990 season.
Posted by Spiff at 12:06 PM