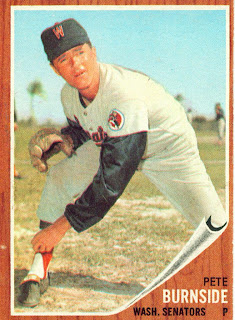 1962 was Pete Burnside's second season with the Senators. He appears here on card number 207 of the 1962 Topps set. Before we take a look at Pete's year there are a couple of things about this card that deserve comment. First is the field that Burnside is posing on. Wouldn't see a field like that now. Even the Spring Training (which I am guessing is where this was taken) fields are nicer looking than this one. Kind of reminds me of the fields we used to play on when I played Little League ball.

The second thing that caught my eye was Pete's glove. That thing's been used pretty hard. Evidently Burnside was not getting an endorsement deal in the early 1960's.

Pete Burnside and Bennie Daniels split the role of fifth starter and long relief in 1962. The Senators, like most teams, regularly went with a four man rotation. Pete still got plenty of starts though, 20 in 40 games appeared in.

In those 40 games Burnside pitched 149.2 innings and faced 645 batters. His ERA was an unimpressive 4.45 and he posted a 1.356 WHIP. In all Pete allowed 20 home runs (second most of anyone on the pitching staff) and walked 50 of the batters he faced while striking out 74. He also hit two batters and let go with one wild pitch. An interesting note is that, while Pete allowed 82 runs only 74 of them were earned. That's not a very good commentary on the Senators defense.

1962 was a mixed year for Pete. He pitched a career high number of innings and struck out more batters than in any other year. He also managed to lower his ERA and WHIP from the previous season. On the other hand his walks and home runs allowed were also career highs.

Apparently the Senators didn't think Burnside was improving fast enough. On December 5, 1962 they traded him to the Baltimore Orioles along with Bob Johnson. In return Washington got Marv Breeding, Art Quirk, and Barry Shetrone.
Posted by Spiff at 12:16 PM