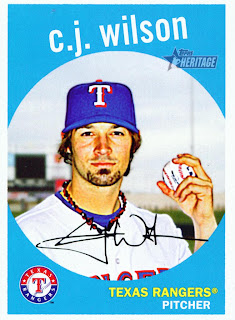 I know, Thursdays are normally either a game-used or an autograph card. This 2008 Topps Heritage card, number 526, is neither. The problem is that I have no more autographed or game-used cards of C.J. Wilson and he deserves a card today. Deserves it very much.

Going into last night's game the Rangers were on a three game skid. They are barely clinging to a first place tie with the Angels and needed a win, desperately. Send in the ace.

C.J. went all nine innings and allowed just one earned run while striking out 12. The Mariners also sneaked in an unearned run for a total of two runs. Going into the fifth the score was tied, Mitch Moreland led off with a home run. That was all the lead Wilson would need but the offense added two more anyway. Final: 5-2 Texas.

Great to see C.J. continuing where he left off last year. With the departure of Cliff Lee he is now the staff number one. So far he has been handling the job well. He currently leads the pitching staff in starts (7), innings pitched (49.1), wins (4), and strikeouts (46). His ERA is a respectable 2.92 (second lowest in the rotation) and he has just one loss.

All in all I am pleased with Wilson's performance so far. He has stepped up to the challenge, met it to this point, and seems to be enjoying himself. It is also nice to see that he has remained one of the most fan-friendly players in the Majors. Hopefully Texas won't waste any time signing him to a new contract after this season. Speaking of signing, maybe I need to send him a couple of more cards to sign so I'll have them for future posts. The way he's been pitching I'll need them.
Posted by Spiff at 8:20 PM

Great night to have him starting in my fantasy rotation. Especially great since I had Tim Hudson going last night!

I meant in the same night I had hudson going, lol. Tonight I had Halladay going!