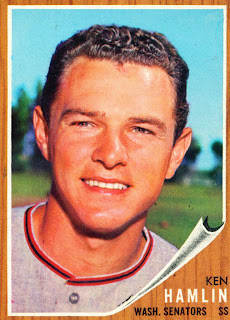 Well, everyone is home and doing well. No NICU stay like with the last wee one. Gotta say I appreciate that aspect.

Since the past few days have been busy and the Rangers lost last night I decided to take a peek back at the Senators. Up today is Ken Hamlin on card number 296 of the 1962 Topps set.

The Senators liked Ken Hamlin. In the 1960 expansion draft they picked him up from the Kansas City A's. They traded him to the Angels the same day. In return Washington got Bud Zipfel. The Angels traded Ken to minor league Toronto on June 22, 1961. On November 27th Washington grabbed Ken again in the rule five draft.

Going into the 1962 season Hamlin was out to win the starting shortstop job. Ed Brinkman was also aiming for the slot though and the two ended up splitting time at short. Overall Ken would appear in 98 games for the Senators - 87 of those would be at short.

Hamlin would put in 666.2 innings at short during the season and see 349 chances. He would commit 13 errors for a fielding percentage of .963. That was about on par with the league average percentage of .962.

Ken made 318 trips to the plate in 1962. He would post a batting average of .253 and an on-base percentage of .303. Neither of those numbers were particularly stunning. The rest of Ken's offensive numbers were not noteworthy. The exception to that might be the curious fact that he walked the same number of times he struck out (22) and that he stole the same number of bases as the number of times he got caught stealing (7).

All in all Ken hadn't been that impressive in 1962. With young Ed Brinkman also hungry for the shortstop job Hamlin needed to be impressive to get things nailed down. In spite of getting the majority of the playing time at short he couldn't close the deal. Washington would hold on to him but he would spend 1963 season in the minors. At 27 years old he needed to do something to get his career moving.
Posted by Spiff at 7:01 PM