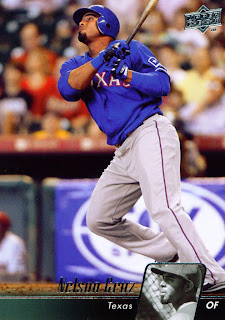 Nelson Cruz, shown here on card number 494 of the 2010 Upper Deck set, continued to hammer opposing pitching as he went 2-for-4 at the plate with a walk. His two hits were a home run and a double. In addition, he also made a spectacular catch while running into center fielder Craig Gentry.

All told Nellie sent six balls over the fence and bumped in 13 RBI during the series. Both are all-time records for post-season series. That performance won Cruz the ALCS MVP as well as helping to send the Rangers back to the World Series.

Back in the World Series for the second time in a row. Hasn't been done since the Yankees did it in 1999-2000. After 49 years the drought has broken and now the dam seems to be totally down. Can't say this is getting old at all. I am about as pumped this year as I was last year.

Up next, the St. Louis Cardinals. Kind of a conflict here as my father has always been a Redbirds fan and my Grandfather followed them prior to 1972. If the American League team had been anyone other than the Rangers I would be pulling for the Cards. Texas trumps though. Go Rangers!
Posted by Spiff at 11:46 AM

It's amazing to think the Rangers are going back to the World Series!

Rooting for you guys.

Well, you guys's team, I mean.