Wrapping up the Rays. 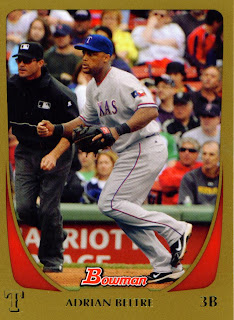 Wow! That's about all that can be said about Adrian Beltre's performance yesterday. Beltre, pictured here on card number 34 of the 2011 Bowman Gold set, hammered three home runs to follow up Ian Kinsler's solo shot that led off the game.

Those long balls mark the first time in the history of the Division Series that a player has gone deep three times in one game.

All told, Texas ended up scoring all their runs on solo homers as they beat Tampa Bay 4-3. Starting pitcher Matt Harrison went five innings and gave up two runs to get the win. Derek Holland, Mike Adams, and Alexi Ogando combined out of the bullpen to hold the Devil Rays scoreless for an additional three innings. Neftali Feliz stumbled a bit in the ninth as he coughed up a run but he still got the save.

The win gave the Rangers a 3-1 victory in the ALDS. Now they just have to wait and see who wins the Yankees/Tigers series. New York thumped Detroit last night to send the series to a fifth game tomorrow.

Have to say that I am very glad to see the Rangers win this series. Repeating as a divisional champ is hard. Having any level of success in the playoffs two years in a row is even harder. Hopefully the team is able to keep pushing and is able to make a second World Series appearance.
Posted by Spiff at 10:32 AM