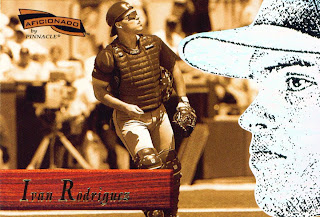 Well, last night was a change. For the first time in a long time I watched the Rangers in a critical game and didn't think to myself, "I wish they still had Pudge." Catcher Mike Napoli did a pretty good impersonation of Ivan Rodriguez, shown here on card numer 96 of the 1996 Aficionado set.

Nap did just about everything for the Rangers last night. He hammered a two run double in the eighth inning. That added to the two solo home runs the Rangers had already scored off Chris Carpenter courtesy of Adrian Beltre and Mitch Moreland. 4-2 ended up being the final score.

Pretty good night for Nap eh? Well, in addition to his RBI performance Mike also made three great plays in the field. He caught Ranger nemesis Allen Craig stealing. Twice. Once on a missed hit-and-run play and once on the back end of a strike-out throw-out double play. The batter at the plate both times? Albert Pujols. On the final play of the game Neftali Feliz struck out Lance Berkman. Napoli missed the ball and it hit his left shin guard before shooting up the first base line. I figured that the Cardinals had just gotten an extra out. Up popped Mike and raced down the line. He outpaced the sprinting Berkman and pounced on the ball about three quarters of the way to the bag. An underhand toss to Moreland and the Rangers have a 3-2 lead in the Series.

Back to St. Louis with the lead. I'll take that. Go Rangers!
Posted by Spiff at 8:20 PM