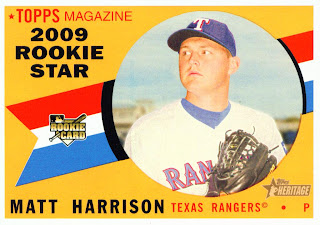 Not even going to recap last night's nightmare. You want a recap then go to any media outlet. They're all screaming about what a great World Series this is and how the game was awesome. As an ending note most of them say what a great game tonight is going to be.

I don't agree. I think the deciding game of the series was played last night. Mike Shannon commented that if Texas blew the game last night then St. Louis would own tonight. I fear he is right. The championship belongs to the Cardinals unless they hand it to the Rangers.

It's up to Matt Harrison, shown on his 2009 Topps Heritage card, to prove me wrong. I hope he does. I really hope he does. More than anything hope he does. Get out there and throw the game of your life Matt. That's what you're going to have to do to stand a chance of wearing a ring.
Posted by Spiff at 10:07 AM

Over?? Was it over when the Germans bombed Pearl Harbor? No! It's not over until the Rangers win this sucker tonight.