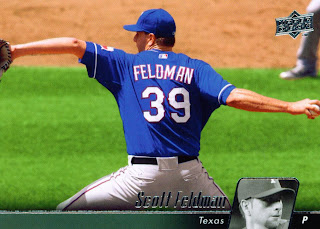 Well, Nelson Cruz almost got two cards in a row. While looking for a Cruz card I came across card number 505 in the 2010 Upper Deck set first.

Decided to post this card of Scott Feldman to recognize his performance in last night's game. Starter Derek Holland wasn't having a good night and Ron Washington pulled him with one out left in the third inning. Seeing as Dutch had given up three runs to that point, the hook made sense. Apparently Derek just didn't have it.

The downside to pulling the starter that early is that it can really burn up the bullpen. With no travel day that can hurt. Enter Scott Feldman. Scooter came in and tossed 4.1 innings of one hit ball. He finally gave Alexi Ogando the ball in the eighth inning. Talk about saving some wear and tear on the bullpen.

Good thing that Feldman lasted as long as he did since the game lasted as long as it did. Tied in the ninth the game remained 3-3 until the bottom of the eleventh. With the bases loaded Nelson Cruz hammered his second home run of the game. Walk-off grand slam! (First time in postseason history by the way.) Texas wins 7-3 and takes a 2-1 lead in the ALCS.

I have to say that I am enjoying the way things are going for the Rangers right now. Cruz seems to have found his bat and the bullpen seems to have found their groove. Going to Detroit is always stressful but it's a little less so with a two game lead in the series. Colby Lewis faces off with Doug Fister tonight. Here's to hoping that Colby can stay on target and keep the Tigers off the board.
Posted by Spiff at 10:14 AM