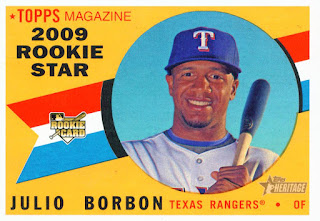 Well, Julio Borbon didn't make the final cut for this year's Opening Day roster. He's started in center field for Texas the past two seasons but was optioned to Triple A yesterday.

Julio, shown here on card 617 of the 2009 Topps Heritage set, had struggled for a large part of Spring Training. If not for Craig Gentry's injury battles, Borbon might have gotten optioned sooner than he did.

Borbon had better get it in gear in Round Rock if he wants to make it back to Arlington. Leonys Martin is also playing for The Express and was looking to be their center fielder. Could be an interesting competition. The end result could be Borbon catching fire and either moving to a corner outfield slot or getting called up as a result of slump or injury. On the other end of the spectrum, he could find himself on the trade block. The latter is a possibility that T.R. Sullivan hinted at on his blog several days ago.
Posted by Spiff at 12:05 PM