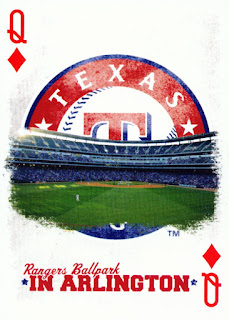 Making up some ground in T.R. Sullivan's top 50 Bizarre moments list. With one exception the next few moments really don't deal with any specific player. As such, I am posting this queen of diamonds card from the Academy Sports Outdoors deck that was a stadium giveaway a couple of years ago. Ok, on to the entries.

Number 18. The rain delay - On August 12, 1990 the Rangers were supposed to play the White Sox at Comiskey Park. First pitch was scheduled to go at 1:30 in the afternoon. Problem was, it was raining at that time. Rain delay. Eight hours later the White Sox finally called off the game because it was still raining. So much for not wanting to make the game up in Texas. League rules no longer allow clubs to wait that long before calling a game due to weather.

Number 19. Heading for Tampa Bay - On August 26, 1988 the Rangers issued a press release stating that the team had been sold and was relocating to Tampa, Florida. Apparently the deal would have gone through had not Edward Gaylord stepped in and exercised an option to buy the team. Of course, his purchase was not approved by the league and eventually future President George W. Bush ended up as part of the new ownership in 1989. (See number 13 on the Top 50 Decisions list) The team stayed put.

Number 20. With Juan Gonzalez sitting out the game due to a wrist injury, catcher Gregg Zaun was pressed into service in right field during the 1999 Hall of Fame Game. Zaun proceeded to call his own shot by pointing to the right field seats before hitting a home run. Babe Ruth must have smiled.

Number 21. Ameriquest Field. The big bell in left field was pretty strange. Even stranger when it abruptly disappeared during Ameriquest's bankruptcy. Repossessed?

Number 22. The paratrooper. The idea was to have U.S. Army Rangers land on the field prior to the 2010 home opener. Unfortunately one of them ended up hanging from a flagpole at the ballpark. Oops!

Number 23. Las Vegas Night. Larry Schmittou was the Rangers marketing VP in the 1980's and had several crazy promotions. One of them involved a drawing that sent a lucky fan to Las Vegas. Straight from Arlington Stadium. Not sure if they got to stay until the end of the game or had to leave midway through.
Posted by Spiff at 5:01 PM