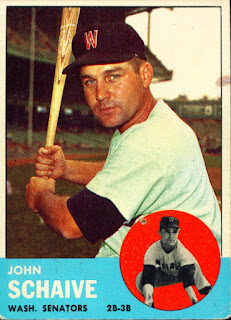 Ugly loss last night. The four runs that the Devil Rays were able to plate in the first inning pretty much sealed the deal. It was good to see the Rangers fight back but it was still a loss. Time to take a quick peek back to 1963.

John Schaive didn't play for Washington in 1961 as he spent the season in the minors. He would spend the 1962 season with the Senators. It was back to the minors for most of the 1963 season for Schaive, shown here on card 356 of the 1963 Topps set. The exception was a cup of coffee with the parent club. John pinch-hit three times in three games. He would get no hits and would strike out once. That was it. No play in the field.

Starting the 1963 season with Washington's Triple A team, the York White Roses, Schaive would appear in 67 games and post a very good .321 batting average. It wasn't good enough though. Apparently the Senators sent Johnny to the Indians in an unrecorded transaction. He would finish the season with Cleveland's Triple A affiliate.

1963 was it for Schaive. Those three trips to the plate would mark the final games of his Major League career. Though he would last through the 1966 season in the minors he would never again appear in a Big League game.
Posted by Spiff at 8:49 PM

Schiave is one of 8 players.to have played for both the "old" and "new" Washington Senators: