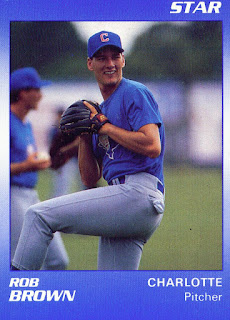 Ok, not a whole lot positive to talk about from last night. The Rangers lost. Ron Washington got ejected on his 60th birthday, and Derek Holland continues to struggle. Sounds like a good time to move along in the 1990 Star Charlotte Rangers team set.

Pitcher Rob Brown appears on card number 2 in the set. Texas picked Rob in the 16th round of the 1989 draft. He played that same year for Gastonia.

1990 would see a small promotion for Brown, to A+ ball. He would play the entire season with Charlotte, appearing in 40 games. Most of Rob's 118.2 innings were thrown in relief as he made just four starts.

In those 118.2 innings Brown struck out 102 batters while walking just 40 in route to a 1.90 ERA and a 0.952 WHIP. Pretty impressive numbers, even for A ball. Those numbers got Rob promoted to Double A Tulsa for the 1991 season. If he could translate even part of his 1990 performance at that level he stood an excellent chance of moving up even further in the Rangers organization.
Posted by Spiff at 7:02 PM