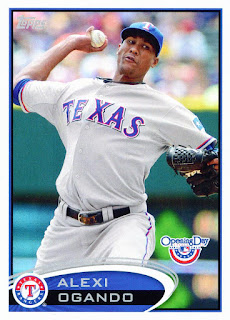 Well, the Rangers won one against the A's last night in Oakland. Former A's prospect Alexi Ogando was the key player of the night.

Starter Derek Holland went 5.1 innings and gave up all three of Oakland's runs. Suffering from the effects of a stomach virus, Dutch left the game early and with two runners on. In came Ogando, shown here on card 104 of the 2012 Topps Opening Day set. Alexi shut down the potential A's rally to get out of the sixth. He then went through the seventh without giving up a run. With one hit allowed, one walk, and four struck out Ogando delivered the two run lead to Mike Adams.

Mike held Oakland scoreless through the eighth and in the ninth it was Joe Nathan time. Final score: 6-3 Rangers.

Great to have the bullpen able to ride in and put out the fire. Just so long as the starters don't make a habit of that, it will be all right.
Posted by Spiff at 9:41 PM