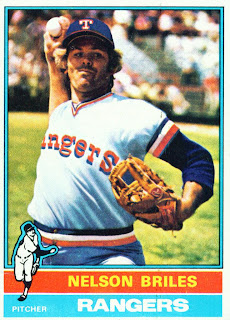 Ugly game last night. At least from the Rangers standpoint. If you happen to be an A's fan like my brother then you probably enjoyed it. I was getting text messages from him around midnight celebrating the route and lamenting the lost no-hitter. Ugh. Time to take another break from the season.

Nelson Briles, shown here on card 569 of the 1976 Topps set, came to Texas from Kansas City in return for infielder Dave Nelson. Having suffered through two sub-par seasons in Kansas City, Briles was seen as a gamble and a potential rotation upgrade. True, he had injured his knee in KC during the 1974 season but he had also been a star with the Pirates and Cardinals before that.

What Texas got in 1976 was closer to the Cards and Bucs version of Briles rather than what the Royals had experienced. Nellie started 31 of the 32 games he appeared in and won 11 of them. That made him and Gaylord Perry the only two Rangers starters with winning records.

In 210 innings pitched Briles recorded a 3.26 ERA and a 1.290 WHIP. Both were significant improvements over the previous season. He also struck out 98 batters while walking just 47, not bad numbers for a control pitcher who relied mainly on guile.

As a human interest note, Nellie could also sing. Sing well too. In fact, he sang the National Anthem prior to the Old Timer's Game in Arlington in 1976 and had previously sung it before Game Four of the 1973 World Series. Not too shabby there.

1976 had been a bounce-back season for Nelson Briles. At age 32 he seemed to be reviving his baseball career. Keeping it up in 1977 would be the real challenge.
Posted by Spiff at 9:09 PM