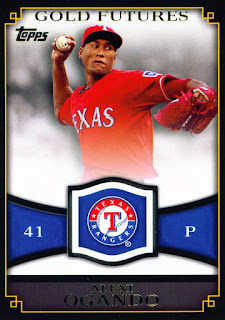 Well, the Angels are to within three games and are showing no signs of stumbling. Meanwhile the Rangers are playing poorly, very poorly. Even the 5-0 win over the Giants on Sunday was painful.

Alexi Ogando, shown here on his 2012 Topps Gold Futures card, made a spot start on Sunday for Derek Holland. Dutch joined Neftali Feliz on the Disabled List with a stomach virus. After pitching three scoreless innings Ogando came up in the fourth. He bunted for a hit but strained a groin muscle. Off to the DL he went today. Three pitchers now down - two until after the All-Star break. After avoiding the injury bug last season, the pitching staff is now making up for lost time. Going to get real ugly here shortly when the Angels get caught up.

Former Rangers hitting coach Rudy Jaramillo got some bad news today as well. The Cubs sacked him. After leaving his job with the Rangers because he was concerned that they might not keep him long term, Rudy lasted two and a half seasons in Chicago. The Cubs on-base percentage dropped every year he was there. Guess the job security he was looking for didn't come to fruition.

Not sure who got the bad news in Canada today as the Blue Jays released Vladimir Guerrero. I suppose it's possible that nobody did. Vlad had signed a minor league deal but appeared to be blocked at Triple A by younger players. He then asked for his release and the Jays gave it to him. He could be an interesting piece for a team looking for an upgrade at DH down the stretch or a powerful pinch-hitter. On the other had he could fail to get a contract or to deliver. I find the latter hard to believe, even at Vlad's age.
Posted by Spiff at 8:00 PM

I was sorry to hear about Rudy and Alexi. I hadn't heard about Vlad. Make it 4 now, thanks to the Rangers bats and the Dodgers.