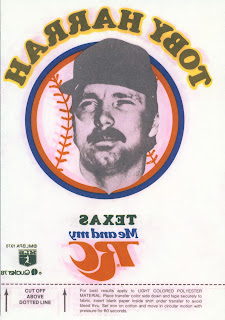 The Rangers announced their All-Time team today and there were a couple of surprises. The first is that more players were named to each position than voters were allowed to select on their ballots. Makes sense I suppose as it decreases the chance of a tie. The second surprise is that a couple of players made the team in more than one position. Should have left them where they got the most votes and knocked them off the second position. If you want to compare the results and see how far off my ballot was you can see the way I voted in this post.

Here is the team and a few of my comments.

Starting pitchers: Nolan Ryan, Charlie Hough, Kenny Rogers, and Ferguson Jenkins. No problem with Nolan, even though his best years were not in Texas. Charlie deserves to get in for hanging in there during the down years of the 1980's. Rogers is in for his perfect game. Jenkins is probably in for 1974. Overall I think the voters got it right but I would still take Jon Matlack over Rogers for a lefty.

Relievers: John Wetteland, Neftali Feliz, and Jeff Russell. Wetteland and Feliz deserve to get in. Good to see Russell getting some love as well. Pen seems a bit thin though and I think that a couple of more guys could have been considered.

First base: Rafael Palmeiro and Will Clark. No arguments here.

Second base: Ian Kinsler and Michael Young. Shame to see Bump Wills left off. Young will do but his best years were not at second.

Shortstop: Michael Young and Elvis Andrus. This is probably where Young should have landed but I would have left him at second anyway and added Toby Harrah, shown above on a 1978 RC Cola iron-on.

Third base: Buddy Bell and Steve Buechele. Beltre hasn't been around long enough. If he stays and keeps playing the way he is, he will threaten Boo.

Outfield: Juan Gonzalez, Josh Hamilton, Rusty Greer, Ruben Sierra, Jeff Burroughs, and Nelson Cruz. No Al Oliver??? Not sure what happened here but the omission of Scoop is a travesty. I could live with him replacing Sierra or Cruz.

Designated hitter: Juan Gonzalez and Rafael Palmeiro. Another solution to the Oliver snub would be to leave Gonzo at DH and put Al in the outfield. If you leave Raffy at first you could put Larry Parrish in here. Of course you could also leave Palmeiro here and add Pete O'Brien at first.

Overall this team is ok and is a good representation of past and present Rangers teams. The omissions of Al Oliver and Toby Harrah are outrageous but understandable. Very glad to see that Alex Rodriguez got left off.
Anyone else care to share their thoughts?
Posted by Spiff at 7:40 PM