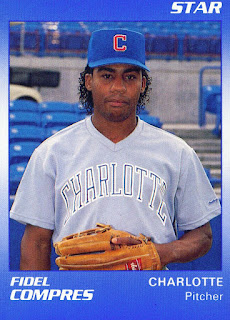 Going to be away from my computer all day today so you'll have to make do with a pre-scheduled post. My apologies for this not matching up with current happenings.

Fidel Compres, shown here on card 4 of the 1990 Star Charlotte Rangers set, didn't give up easily. His pro career had started as a 19 year old in 1984. He had signed with Cleveland in November of 1983 and would play five seasons in the Indians system without ever getting above Single A. Most players would have given up after that. Not Compres.

That was good enough for Compres to start the 1990 season with A+ Charlotte. He would start 16 games and appear in relief in six more. All told he would pitch 116.2 innings and post a 2.24 ERA. His WHIP tallied to 1.131. Up to Double A Tulsa he went.

Tulsa is where the wheels came off for Compres. He appeared in just six games, all in relief. In the 10.1 innings he pitched he saw his ERA skyrocket to 6.10 and his WHIP climb to 2.226. Ugly stuff. In two seasons the Rangers had seen what it took Cleveland five to see, Compres was done as far as the Rangers were concerned.

Fidel didn't quit though. He had the drive and the Cardinals had the time so he ended up with them in 1991. In 1993 he went to the Padres organization in mid-season. In 1995 he was out of organized baseball. Ten years in the minors would be enough for most. Not for Fidel. In 1998 he mounted a comeback attempt in independent ball after missing two seasons. It failed. In 2000 he tried again in independent ball. Still no luck. At 35 that would finally be the end of the road for Compres. 16 years after he first signed with the Indians he would finally hang it up after never getting higher than Triple A.
Posted by Spiff at 12:43 PM

I love the Star sets.

A simple design which they got to first and ran with it for all their sets.