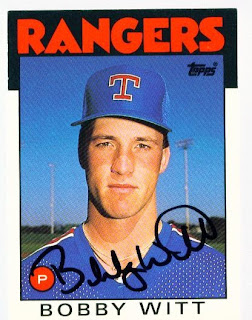 In 1986 Bobby Witt was a highly touted prospect in the Rangers farm system. Texas took Witt, shown here on a signed 1986 Topps card, in the first round of the 1985 draft. By the beginning of the 1986 season the powers that be felt the 21-year-old was ready for the big time.

On April 10, 1986 Witt arrived in Arlington with his Major League debut. Bobby lasted just 3.1 innings against the Toronto Blue Jays. He allowed 5 earned runs on five hits, six walks, and one wild pitch. He still managed to slide by with a no-decision.

The April 10th start might have been chalked up to nerves. Witt got a second chance a week later against the Brewers in Milwaukee. That's where things got crazy.

On April 17, 1986 Bobby Witt took the mound for the second time in a Major League game. He was probably glad to have the first start behind him and ready to lower his huge ERA. He would go five innings while giving up just two runs. That might be considered a normal bounce-back game for a rookie but the numbers were amazing. Witt launched four wild pitches, walked 8, and struck out 10. He didn't allow a hit. Amazingly he didn't hit anyone. That was probably the Brewers' main concern though and likely led to several of the whiffs. How bizarre is that stat line?
Posted by Spiff at 3:14 PM